Looking for experienced techs. Minimum 5 years experience In a shop. Must have own tools. Pay is based on experience. Very busy full service auto repair facility. Looking for the best of the best. 8-5 M-F paid holidays. Weekends off. $20 to $35 per hour.

There welding up the cross member on this 54 Bel-Air, that were putting in the 383 strocker. Ryan's Car Care Center

If you are needing auto service and dont want to be exposed to the public. We offer a pick up and delivery of your vehicles. Keeping your risk of exposure down. Welcoming the newest memeber of the Ryans Car Care Family.

Always great to hear from the one who appreciate your services.

This is what happens. When u dont change the oil.

When you know your doing things the right way. Gifts feom customers.

Nothing is too big or too small for us to service.

How to Choose a Technician
Is one technician better than another?
•Look for shops that display various certifications - like an Automotive Service Excellence seal. Certification indicates that some or all of the technicians meet basic standards of knowledge and competence in specific technical areas. Make sure the certifications are current, but remember that certification alone is no guarantee of good or honest work.
•Ask if the technician or shop has experience working on the same make or model vehicle as yours.

Did You Know?
•The first cars did not have steering wheels. Drivers steered with a lever.
•The first speeding ticket was issued in 1902.
•In 1916, 55% of the cars in the world were Model T Fords, a record that has never been beaten.
•The first gas gauge appeared in cars in 1922.
•In 1923, 173 new inventions by women for cars had been reported. Among these inventions were a carburetor and an electric engine starter.
•The first car radio was invented in 1929.
•Buick introduced the first electric turn signals in 1938.
•Most American car horns beep in the key of F.
•The automobile is the most recycled consumer product in the world today.
•Volkswagen sold only 330 VW Beetles in their first year in the United States.
•Women spend more than $65 million on new cars and trucks, influence 80 percent of all new car purchases, and buy 60 percent of all new cars.
•135 million cars travel the nation’s roads and interstates each day.
•The first Ford cars had Dodge engines.
•One seventh of all new US auto and truck sales are in Southern California.
•The average 1999 model year automobile cost $5,674 per year to own and operate.
•In the 1970s, cars were scrapped almost twice as often as small trucks, but over the years, cars have become more durable. By 1999, the scrappage rate was almost equal.
•The city with the most Rolls Royces per capita is Hong Kong.
•The modern brake light in rear windows came from a suggestion by Elizabeth Dole.
•The first product Motorola started to develop was a record player for cars. The most famous record player then was the Victrola, so they called themselves Motorola.
•In 2002, SUVs accounted for 30% of all cars sold.
•The term ‘tune-up’ was coined when Henry Ford was working on his first automobile prototype. This first ignition system was very simple; one ignition coil for one spark plug, so four spark plugs would require four ignition coils. These coils needed to be adjusted to provide the same spark intensity for better idle and acceleration. As these coils worked, they made a buzzing sound. When all the coils were adjusted properly, they all buzzed at the same level – they were “in tune”. Today’s distributor systems have done away with Ford’s configuration, but some drivers still associate poor running quality with the need to be in tune. Today’s automobiles do not require old-fashioned tune-ups, but the term is now associated with the replacement of spark plugs and any performance or rough idle problem that related to engine operation.

Beware car kiosks that “read” the car’s computer and give you a “code” to take to an automotive parts store. The premise is that the “code” will diagnose what is wrong with the car and allow you to go to a retail automotive supply store, give them the code and purchase the correct part. Car problems are rarely that easy to diagnose. There are myriad stories of drivers who’ve relied on the kiosks and still had problems with their cars. 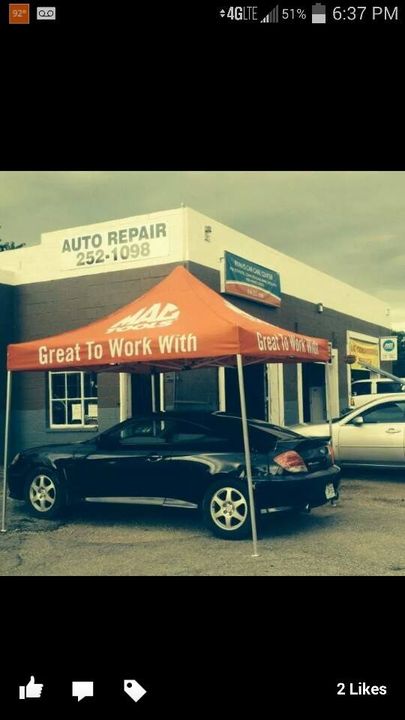 You drive it we can fix it www.carrepairindependence.com

Be the first to know and let us send you an email when Ryan's Car Care Center posts news and promotions. Your email address will not be used for any other purpose, and you can unsubscribe at any time.

Other Automotive repair in Independence

Awesome Crew ! The owner, Ryan is a amazing guy that cares about his customers and their satisfaction. RCCC is the only shop that touches our vehicles and keeps them on the road. 1 of my vehicles is 20 years old the other is 18 years old nudging 250,000 miles. Ryan keeps them running great ! He is fair on pricing and more importantly, honest and friendly. I’ve been using him for years. Most recently, I will not mention what he did but Ryan went WAY ABOVE and BEYOND to help us out in a timely matter. And it ended up costing us nothing. So, If you’re looking for a great auto shop, seriously.... Look no further.
Ryan, this is what happened when my battery died. Is this something we can fix? You guys didn't cause it I know.