The Impala continues.....(excuse the blurred photos)

All this week 20% off repairs Free towing available. If you've been putting off getting your car fixed now is definitely the time to get it done come on in and give me a call and we'll have you fixed up and rolling away in no time!

For anyone that needs it I am offering a used car locator and inspection service. Just get in touch with me, we'll work out a budget and your needs and you will be driving your new car in no time! 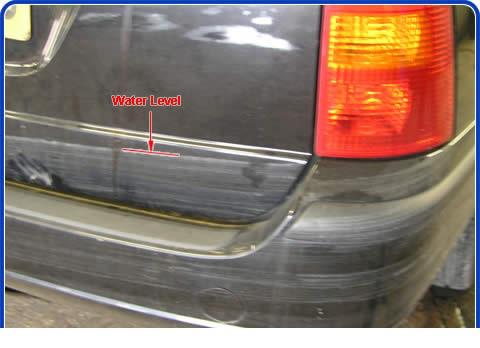 The photo shows the 'tide marks' which are well above the level of the bottom doors and boot. The interior was filled with water, and although this water was clean when it left the water main, it had picked up plenty of mud and clay which made up a silt that coated everything.

The water level was far above the level of the base of the seats, but luckily below the level of most of the electrics. Water can play havoc with car electrics, but often it is still cheaper to replace electrical modules and have the car properly cleaned than to buy a new car. So even with the crash damage on this car, it isn't a write-off.

We checked out the car and found that the driver's side electric window wasn't working, but by the time we finished the car, the component had dried out and was working again.

Removing the silt is no easy task! To properly treat this car we need to take it apart piece-by-piece, clean it, disinfect it, and put it back together.

Everything in the car had become sodden, including maps and papers which had floated around and disintegrated.

This shows the silt on the door shuts. This amount of silt is also on the carpets and seats, to avoid any problems in the future with odors, this will all have to be washed out.

We also sprayed the whole interior with enzymes. Right away this process made a large difference to the smell of the vehicle which up until this point had smelt much like a swamp.

We then began dismantling the interior, removing the back seats and trunk carpet. As each item was removed from the car it was cleaned and disinfected. Many of the items could be washed using a hot pressure washer with disinfectant run through it.

As soon as each item was washed, it was hung to dry - this is actually the slowest part of the process, as it's no good us placing the upholstery back in the car if it is still wet. The seats and the carpet underlay are very thick and can take a long time to dry, even when we use air blowers and dehumidifiers.

With seats and carpets removed, we were left with a bare shell that was full of dirty water (although disinfectant had already been added) The photos show just how much flood water was still in the car. We used an extractor (wet vacuum cleaner) to remove the water, and to wash the interior down further. Above you can see us working with a brush and soap spray.

As each item was removed from the car it was cleaned and disinfected. Items such as the seats had been treated with bio-active enzymes shortly after we had received the car and so had been given plenty of time to work. Although similar in principal to enzymes used in some domestic products, the enzymes we use are especially designed for this kind of work undertake.After activation, we apply pure enzymes to the car, they will not attack any living thing and so are totally safe, but they will eat anything that bacteria can eat, and when the bacteria starves and dies, they then eat the bacteria.

The photo shows the state of the seats before washing. As these contained no electrical gizmos such as heating elements, air bags or sensors, we were able to flush them through with lots of water - giving them a shampoo isn't quite enough in these cases as they contain a lot of silt, plenty of hot water is the answer for flushing them through and washing the sediment away. Of course, we did shampoo them after we washed them. Luckily, the sponge padding inside the seat is molded and tends to have a rather smooth shiny surface that the silt won't pe*****te.

We were also able to pressure wash the carpets and underlay with disinfectant and hot water. These items are made from synthetic materials and are quite safe to wash in this way, although carpet underlay can be delicate and may not stand up to pressure washing. Sometimes in cases of flood damage it may be preferable to replace the underlay, but in this case we were able to salvage it.

The center console, plastic trim and panels was also cleaned and disinfected. The plastic cups are used for keeping screws and clips in so that they don't get lost - you may often see them in our photos, now you know why! The white bottles are special fragrance chemicals that we use for odor elimination.

We were able to start drying out the car before the final parts were removed. We used an air blower to circulate air inside the vehicle, and we also used an industrial dehumidifier to ambient dry the vehicle and it's parts.

We were able to return the car as good as new, odor free, silt free and completely dry. Our flood recovery service gives insurers and buyers of salvaged vehicles a cheaper option than replacing parts.

The parts begin to arive

Light tinting available!!!! Gloss, Matte, Or Flat how ever you want it. Headlights, Tail Lights, Blinkers, or Markers. Also blacking out of emblems, badges, grills, ect. Lets set something up and give your car that cool stealth look it deserves!

another custom painted wheel I did

Some more custom paint work I did

So for everyone just joining us this is my custom business. We will really do most anything if you have a dream we'll make it happen, Engine, forced induction, stereo, alarm, remote start, tint, suspension, exhaust, you name it we do it. Also full paint and body work available weather its a simple repaint, collision damage, or a custom job we can handle it. We are also doing a full array of auto repair so if there's something wrong with your car just give me a call and come on in. Thanks for your support! 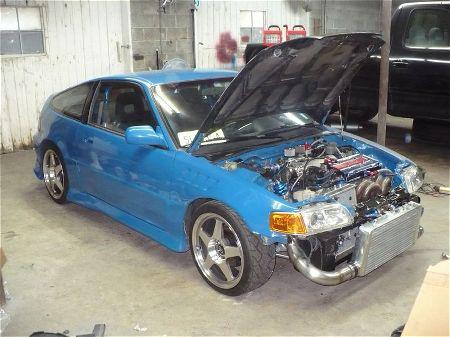 Custom Oil pans made to order

We build custom Radiators and Intercoolers

Be the first to know and let us send you an email when ForcedXS posts news and promotions. Your email address will not be used for any other purpose, and you can unsubscribe at any time.

Send a message to ForcedXS:

Other Automotives in New York

For anyone that needs it I am offering a used car locator and inspection service. Just get in touch with me, we'll work out a budget and your needs and you will be driving your new car in no time!
Hey, Chris. Good luck with the business. If you ever need an extra pair of mechanical hands, I would love to help you out on a Saturday when I am not working.
x

Other Automotives in New York (show all)