We specialize in Fuel Filter, Water Separators and filter parts to distributors in over 50 countrie

Every SMM, football juggler Erik Bormann demonstrates his juggling skills at Griffin’s booth. Erik is adored for his talent and skills. People often ask him to appear in shows, commercials and even to educate people on football juggling. 👍😊

It’s been a long time without the chance to meet your peers and business partners live and in person in Europe. We’re excited to welcome you at the 30th edition of SMM from September 6-9 . Griffin is under Singapore Pavilion Hall B7. 229

An interview by Business Times yesterday. Our Global Marketing Director Ms. Reading talked
about how the supply chain challenges are affecting the businesses. It is on the Top Stories section.

Comforting to see a safety is the primary concern during APM. Many visitors are wearing our iFIL face masks 😷 while air disinfection robots go around the hall sanitizing the air. It has been a great welcome back to shows and conferences. Looking forward to the next one!

Day 2 of APM 2022
Yesterday was a great reunion between old industry friends. We’re looking forward to another day of reconnecting and forging new connections.

😊Hello and welcome back🌺!
APM 2022 opens today at MBS. Come to meet Griffin Filtration at the Singapore Pavilion E-Q28. It's going to be THE greatest reunion for all in the maritime business. See you in person today . 😊

Hello and welcome back!
APM 2022 opens today at MBS Singapore. Come to meet Griffin at Singapore Pavilion. It's going to be THE greatest reunion for all in the maritime business. See you in person today .

Dear customers,
For the first time since 2020, Griffin Filtration will be exhibiting at the Asia Pacific Maritime (APM) 2022 Conference at Marina Bay Sands, Singapore from 16-18 March 2022. We welcome you to attend & say hello in-person!
We are under Singapore pavilion (Hall E), booth number E-Q28. We are looking forward to seeing you. 😊
Pre-register to get your visitor pass today:
https://au.eventscloud.com/ereg/index.php?eventid=100213886&source=Web


Griffin Group is a global provider of products and services for the filtration industry, utilizing proprietary technology developed from over 40 years of professional experience purifying petroleum-contaminated seawater.

David Beckham has bought himself an early Christmas present, a new £5 million Ferretti yacht. Beckham has helped to design his new yacht, which will be 100 ft long and will be moored in Miami, Florida. The new yacht is understood to be a fully custom Ferretti. https://marineindustrynews.co.uk/david-beckham-buys-5m-yacht/

David Beckham has bought himself an early Christmas present, reportedly splashing out on a new £5 million yacht from Italian yard Ferretti.

Sharing the thought of changing landscape of our industry.

Get the deets only at: https://bit.ly/3kNr5qq

The Port of Singapore was announced as the “Best Global Seaport” at the 2021 Asia Freight, Logistics and Supply Chain Awards (AFLAS) held in Hong Kong on 21

The beautiful Singapore at night😊

8 years before, Griffin’s Global Marketing Director Ms. Reading and some other business delegates had a business mission to Indonesia led by the American Ambassador to Singapore. The meetings with the Ministry of Industry, the Ministry of Energy and Mineral Resources were the most successful meetings for Griffin Group.

Happy Spring Lantern Festival! May the light guide you to a brighter year!😇
祝大家元宵節快樂🏮🎆🎉🍾️！

iFIL filter is a full range of the filtration product which can be used in many industries. We show case iFIL products with Griffin fuel filter water separators at the International WorkBoat show in New Orleans, USA. Fischer Panda, a German brand , is worldwide renowned manufacturer of diesel generators, hybrid and drive systems for mobile marine and vehicle applications.
This Fischer Panda generator was fitted out with a Compact air conditioning unit with Griffin’s fuel filter water separator GGF227MAC , driven by a Panda 5000i NEO. ​The incredibly quiet 5000i NEO generator using only 50% of its capacity running a total of 22,500 BTU A/C units plus the seawater pump, proved how powerful this variable speed generator unit is.

Have a relax weekend everyone! Look 👀 at this big yellow flower at the world famous Botanic Garden, Singapore. Do you know what flower of this? PM us your answer. The prizes will go to the first three persons who contact us. .

Thank you for your continued support in 2020.
Have a Merry Christmas 🎄 and a good year ahead!

From our teams to yours.

Look at Griffin mobile Filter GMS1362, this
Buggy/Recycler or Blender can help you filtering your fuel ⛽️ of your boats, trucks, machinery and clean your fuel tanks anywhere and anytime as you wish!

Happy weekend everyone! 😊
Go through Griffin’s catalog or key in the cross numbers and search through our website www.griffinfilter.com , you would be able to find the products that you are looking for.

Griffin is a pre-filter for protecting the injection pump and the engine. It is special designed for the trucks such as Renault (Model No. VIX3 3-710-857 ) and Hino trucks.

Asia Pacific Marine Time. Come experience the all-new virtual event alongside some of the leading brands including Griffin Filtration at these two days! View the full list of companies participating at https://bit.ly/3n2Pt6M .

Register at www.apmaritime.com to visit our virtual booth at APM v-connect.

Come experience the all-new virtual event alongside some of the leading brands at ! View the full list of companies participating at https://bit.ly/3n2Pt6M .

When you install a filter or water separator in your ship or a machine , the best is that install with the Rubber Fuel Line Hoses. It will reduce the vibration when the engine starts. If not, it will easy to cause fuel leaking and damage the filter. Here is Griffin’s Rubber Fuel Line Hose. You can purchase the hoses with the filter too.

Avid explorer Elin Signe Askvik is planning to put the mammoth research vessel to good use.

Sun halo spotted over eastern Singapore yesterday. It looks like a big eye watching the earth. Wish everyone safe and happy in the rest 100 days of 2020 .

For iFIL series anti COVID-19 products such as medical or non- medical face masks, face shields, eye mask and many others... You can order from your regional distributors or buy from the local stores .
In Singapore, you can find iFIL’s protective products from RC Cosmetics Store . This over 35 years old’s cosmetics shop located at Bukit Timah Plaza, a very popular shopping mall.
Opening hours: 10am-8pm daily .

Have great week ahead everyone! 😁

Be the first to know and let us send you an email when Griffin Fuel Filter Water Separator posts news and promotions. Your email address will not be used for any other purpose, and you can unsubscribe at any time. 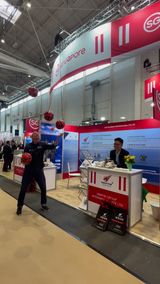 Every SMM, football juggler Erik Bormann demonstrates his juggling skills at Griffin’s booth. Erik is adored for his talent and skills. People often ask him to appear in shows, commercials and even to educate people on football juggling. 👍😊 #SMM #GriffinFiltration #GriffinFilter #iFIL #iFILFilter 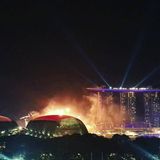 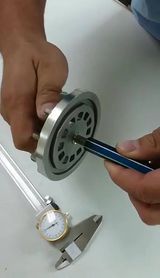 Griffin tests every unit of the filters that include the components before sending to our customers worldwide.

Before an interview about Griffin Filter Water Separator.

The learning never stops....After Griffin Group International Pte Ltd was one of the 16 winners of the Emerging Enterprise Award in 2014 in Singapore, the company is carrying on its growth. Like many other international companies, Griffin Group has decided to setup their main marketing and service centre in Singapore this multi-cultural country with English as the main official language that is also a global commerce, finance and transport hub. Its standings include: the most "technology-ready" nation, top International-meetings city, city with "best investment potential", second-most competitive country, third-largest foreign exchange market, third-largest financial centre, third-largest oil refining and trading centre, and the second-busiest container port. Singapore ranks 5th on the UN Human Development Index and the 3rd highest GDP per capita. Griffin Group has been supported by International Enterprise (IE) Singapore for branding Griffin’s product around the world. IE is the government agency driving Singapore's external economy.

Just received this from a friend. A beautiful spectacular phenomenon of the total solar eclipse passed across a large part of the Indonesian archipelago, where among places most clearly visible to follow were on the islands of Bangka and Belitung off Sumatra. Here the pinnacle of the total eclipse can be seen for the duration of 2 minutes and 10 seconds, which occurred this morning at West Indonesia Time. Enjoy!

Other Oil Lube & Filter Services in Singapore (show all)