Thank you everyone For 600 likes

Homegrown auto major Mahindra & Mahindra plans to launch six new tractors in the next three years, three each under its Mahindra and Swaraj brands.

Expecting good monsoon this year, the company is optimistic about the overall tractor sales in the country to grow about 5 per cent and is banking on new introductions to rev up sales.

"We had launched 'Arjun Novo' (under the Mahindra brand) last year which is doing very well but it is in a very small segment. Towards the end of the financial year, we will be launching the 'Dhruv' in the volume segment and one more product which we will launch sometime in FY17," Mahindra & Mahindra Executive Director Pawan Goenka told PTI.

Elaborating on the overall tractor launch plans of the company he said: "New product wise, basically it is one new product each year for the next three years on the Mahindra side. I think a similar one on the Swaraj side too."

A new introduction under the Swaraj range in coming up soon, he said.

Under the Mahindra range of tractors, M&M sells models such as Yuvraj, Arjun, Bhoomiputra, Sarpanch and Shaan at a horse power range of 15 HP to over 50 HP.

While under the Swaraj badge, which it acquired from Punjab Tractors in 2007, the company sells models with horse power ranging from less than 30 HP to over 50 HP.

Goenka said the shift towards higher powered tractors in the domestic market is happening at a very slow pace against the expectations set earlier.

"There is a gradual shift towards the higher horse power range but that's very slow. The horse power peak in India at the moment is 60 HP and the most popular is 40-45 HP," he added.

So the new products will be in the horse power range where the company already has products, Goenka said.

When asked if the company was looking to bring products from the stable of Mitsubishi Agricultural Machinery (MAM), wherein the company last month announced to acquire 33 per cent stake for $25 million (over Rs 155 crore), Goenka said there were no immediate plans.

"However, in future we are looking at applications from MAM, where we are not present at the moment such as those used to cater to orchards," he said.

Commenting on the market conditions, Goenka said the tractor segment would witness some growth provided monsoon does not play a spoilsport.

"Last year, there was a de-growth in the tractor segment. If monsoon is alright this time around, I don't think there is any reason that the industry should not grow by at least 5 per cent," Goenka said.

Tractor maker Escorts Limited has entered into a Joint Venture with Rajkot-based Amul Group for manufacturing specialty tractor - Steeltrac. Escorts will hold 40% stake in Adico Escorts Agri Equipments Private Limited, while Amul would have the rest 60%. The two companies had joined hands in 2012 for the Steeltrac project, a specialised tractor.

CMD Escrots Rajan Nanda said the specialised tractors market has witnessed a phenomenal growth from zero to approximately 20,000 tractor units within last 4our years. Chairman of the Amul Group Chandu Santoki added that for manufacturing specialised-tractors, a modern production facility has been set up at Rajkot with a capacity to produce over 10,000 tractors per year.

Since a year now, 500 tractors under the Steeltrac brand costing Rs 2.45 lakh have been sold in India. "Since the product had a lot of scope, Escorts entered into a JV with Amul. Yet another product would be launched in Q2, while third would be launched around Q4 of the current fiscal," Shenu Agarwal, VP, Head of Knowledge Management Centre, R&D, Escorts Agri Machinery. The speciality tractor, designed to serve orchards and vineyards would eventually be exported to Asia, Europe and Latin America, Agarwal added.

Be the first to know and let us send you an email when Ravi Tractor Spares.-KIM posts news and promotions. Your email address will not be used for any other purpose, and you can unsubscribe at any time. 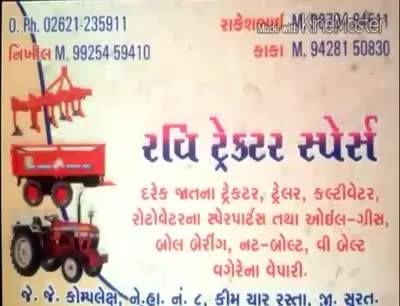